Jonah on the couch - inside the mind of the reluctant prophet 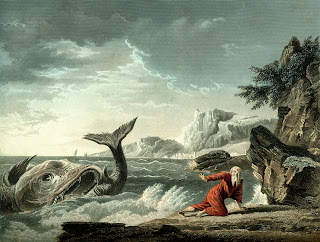 The Days of Awe were approaching and I was thinking about Jonah.

I've always had a soft spot for the story of the reluctant Hebrew Prophet who shirks his mission, runs away to sea and is famously swallowed by a giant fish.

We read his story in the synagogue every Yom Kippur afternoon as a parable of forgiveness and God's love for all of his creation. When Jonah finally makes it to that great city of Nineveh he still doesn't care much for the job he has been tasked with - telling the sinful Ninevites to repent. He can't get his head around the idea that God should care a jot for this people who "do not know their right hand from their left."

I can never quite decide if the story is a comedy or a tragedy. Here he is, centre stage, the man who tries to run away from God. As if God only looks down on Israel and to get out of God's sight all one has to do his hop on board a boat from Joppa and travel west to Tarshish. Jonah, with his Israel-centric view of the universe, is comic and absurd even before the business with the fish.

One thing is for sure, he remains unimpressed by God's mercy even after he is spewed onto dry land by the fish for a shot at redemption.

The Book of Jonah is certainly prophetic but the prophet himself is something of a ethical disappointment. He has little in common with his next door neighbour in the Hebrew bible, my good friend Micah.

"Thanks for the vote of confidence, much appreciated!"

I looked up from the notebook in which I scribble ideas for this blog - and there in my living room was the fishy man himself.

Jonah had occupied my couch. With threads of seaweed still in his hair, he was reclining across the full length of the sofa, his legs sticking over the armrest. In his hand he was holding my TV remote control and flicking through the news channels on mute.

"So you think I'm just some Hebrew comedian do you? I don't buy this interpretation of yours. And I don't see any theology degree hanging on the wall either."

What are you doing in my home?

"You believe in a universal God, a God for all, and for all time. Why should you be so surprised when scripture turns up in your front room? By the way, what year is this?"

What year do you think it is?

"How do I know? I expect you need some sense knocking into you. That's usually why I seem to turn up in strange places. By the way, it must be 40 years since the Munich Olympics, I hope you said a few prayers and stood silent for the murdered Israeli athletes?"

The campaign was all a little too politicised for my liking. It felt like an excuse to remind the world about Palestinian terrorism and Jewish victimhood. Emotional blackmail at an international level. It left a nasty taste. The athletes deserved to be remembered but not at the expense of any kind of honest acknowledgement of what has driven the conflict for 100 years.

"Your kind are so soft. Your compassion is out of all control. Palestinians, Bedouins, African immigrants, Iranians! You put everyone ahead of us in the line. You'd prefer we were squashed to a pulp before raising a figure to protect your own people."

I always thought the point of your story was the importance of a universal ethic of compassion.

"What's the point of compassion for your greatest enemies?. Nineveh was the Third Reich of its day. How much compassion do you have for the Nazis (not to mention their cattle)?"

You're right, it's a pretty tall ask. But at least we could make a start on climbing the ladder.

"You're crazy! Who wants to be the most ethical people in civilisation's graveyard?"

So where does that leave us? What's the point of being Jewish?

"Survival is the imperative. After the Holocaust, it's the 614th commandment. I read that somewhere."

And how does that play itself out today?

"We sideline the Palestinians. We keep the Americans wrapped around our little finger. We build what the hell we like in Judea and Samaria. We keep Gaza under lock and key. We make sure Iran knows who is boss in the Middle East."

And how long do you think we can keep this up before too many people start to ask about human rights as well as Jewish rights?

"As long as we can play the eternal victim, we'll be just fine."

In the big fish, when you thought all was lost, you sounded very different. You called out to God and said: 'They that observe lying vanities forsake their own mercy.'

"A later insertion by the rabbis. Not a true reflection of my point of view. That whole prayer, in the belly of the fish, was the kind of defeatist attitude that suited us in our exile. Weak diaspora mentality designed for keeping in with the locals."

You know, I'm beginning to feel attracted to that whole running away thing you did back then.

"Fine by me. We could do with fewer Jews like you with your naive questions and hypersensitivity. But now who's trying to run away from God?"

Not from God, definitely not from God. Away from reckless power, away from a tribal self-obsession, away from a mad perversion of Judaism that's turned nationalism into a Golden Calf. We are the ones who no longer know our right hand from our left. In fact, our whole moral compass has been sent into spasm at the very moment we think we have found our collective redemption.

"Nice little speech. You and your friends can go back into exile. See if anyone notices."

I'm not planning to hide like you or wait for the storm to blow over. It's not a passive exile I have in mind. I'm grabbing the Hebrew covenant and rescuing it from oblivion - one blog post at a time! If I can open a few Jewish eyes to what's being done in the name of Judaism and the Jewish people then that will be a start.

"I see those murderous terrorist friends of yours in Gaza are still firing rockets into southern Israel. Anything to say?"

Are we really so very innocent? Do we really have not a single thing to answer for? Have you noticed how many more of their children than ours have died across the years? Yet we are the ones who are told to be fearful and feel eternally threatened? Can we never afford to express just a moment of self-reflection or, God forbid, some self-criticism?

"I'll see you on Yom Kippur then?"

Well, we certainly both have much to atone for in our own ways. You've done too much. I've not done enough.

"I've no idea what you mean. I have a clear conscience."

I thought you might say that. You know that's the biggest problem! We can't even see what we are doing. Delusion and denial on a grand scale! And you know, you are right, I was wrong about you being a comic character. Without doubt, your story is tragic. And now, you can get off my couch and hand over the TV remote, I would like my living room back!

"You can have your living room and the remote. I have bigger fish to fry."

And with that the man with the seaweed hair was gone.

Happy New Year/Shonah Tovah! And may we all be written in the Book of Life.