This week a pro-Israel rally due to take place in Manchester in the north of England at the end of this month was abruptly called off after the venue cancelled the booking.

The organisers of No to Terror, Stand with Israel, a relatively new group called North West Friends of Israel (NWFOI), is crying ‘foul’ and blaming the Boycott Divestment Sanctions movement for putting pressure on the hotel. At the time of writing, the Sheridan Suite in Manchester is yet to comment.

The whole (non) event has revealed a great deal about how the most prominent and vocal sections of the Jewish community in Britain view the Israel/Palestine conflict. And since NWFOI is insisting that this is only a temporary setback to its plans, it’s worth looking closely at how the rally was being billed and the language being used to describe the current wave of stabbings and car ramming aimed at Israeli civilians.

When the rally began to be promoted a week ago it was clear it had the backing of the mainstream Jewish community in Britain: the Board of Deputies, the Jewish Leadership Council, the Zionist Federation, and the Chief Rabbi. The Jewish Chronicle suggested 2,000 would turn up. Big numbers for Britain’s small Jewish community of around 270,000.

I never thought a single publicity poster could sum up so much about what’s wrong with the Jewish community in Britain when it comes to Israel. But this one said it all. And what it didn’t say was equally revealing.

Take a look and then I’ll explain more. 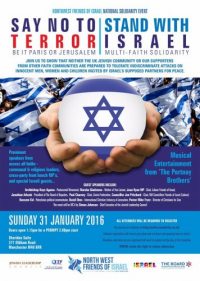 Posted by Robert Cohen at Wednesday, January 20, 2016 No comments:

My five point 2016 manifesto as a dissident, rebellious and awkward Jew

I’m setting out my stall for the year as a digital Jewish activist focusing on Israel/Palestine.

Whether I like it or not, my religion, identity and cultural inheritance means this particular conflict is my problem. I can either attempt to ignore it (not easy) or do something about it (also not easy).

So, here’s my personal manifesto as a dissident, rebellious and awkward Jew in 2016.
Read the full post at Writing from the Edge on Patheos